Beyond the Brew: Trans Day of Visibility

Beyond the Brew: Trans Day of Visibility

From the CCBA Inclusion & Anti-Discrimination Committee 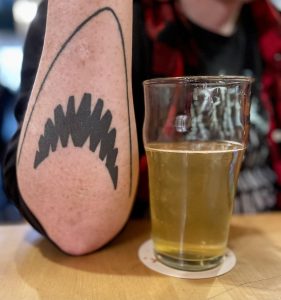 How can breweries serve as allies on both Trans Day of Visibility, as well as the rest of the year?

I’m sure some places will do a token post on Instagram for us and think they’ve shown themselves to be an ally. If that’s all they do, then I’m immediately suspicious. Do charity brews, offer to host events, offer to sponsor events, and prove to us that if you’re claiming to be a safe/inclusive space you actually mean it. Educate yourself, your staff, your owners, your management and keep learning. If you fuck up, apologize and pledge to do better. No one is perfect and no one gets it right 100% of the time so we’re not expecting perfection right out of the gate.
Like my junior high math teacher always said: “show your work”. If you’re working with queer or trans focused organizations, share it with us. I’d love to throw my weekly beer budget at a place that I know is working with my community.

What steps can breweries take to create an inclusive space in their taprooms?

Institute a code of conduct for both staff and patrons, and post it where it’s visible. Have a zero-tolerance policy for hate speech/racism/sexism/transphobia/homophobia and enforce it. I can’t count how many places I’ve been to where they claim to be inclusive and a ‘safe space’ but don’t shut down problematic behaviour and language from patrons. Do the same thing on your social media posts. If you’re telling us we’re welcome in your space via an Instagram post but don’t shut down or delete hateful comments, are we actually welcome or are you just saying we are for social media points?
What is your policy if someone’s gender presentation doesn’t match what is on their ID? Are your staff aware that gender marker X is an option in a few provinces now? Most places I’ve spoken with don’t have any policy or any training for this kind of situation. If you don’t have any policy or plan for this, work with a trans consulting firm or DEI facilitator to start having these conversations and build a plan into your company documentation and training. Do you state that you want to hire trans or gender diverse folks (or BIPOC folks) when you post ads for open positions? If not, why? If you do, that’s great and are you giving them honest consideration when looking at candidates?

Where can breweries find more resources to educate their staff about Trans Day of Visibility?

Start with your local queer and trans community organizations. Many of these organizations have information readily available for the public to access and some offer DEI training or queer/trans inclusion training. If training is a service these organizations provide, hire them to speak to ownership, management and staff. Follow prominent trans or queer social media accounts, read what they’re saying and incorporate that into your training and education. Is there a TDoV march, rally or event in your area? Consider attending as a team to show solidarity with the community. Offer to host an event for the community, or do a charity brew with proceeds going to a trans-focused organization in your area. Engage with the community but don’t expect free labor. If you’re asking for in-depth education from a trans person or organization, pay them for their time and knowledge.

It is common for people to not understand the difference between Trans Visibility Day and gay pride, can you provide some clarification?

If I’m being honest, I think it’d be more accurate to say that people aren’t aware of TDoV the way they are of Pride celebrations. Pride weeks/weekends are typically big events in mid-sized-to-large cities so they’re quite visible and hard to miss. The corporate sponsors also allow for far more marketing to be done and more events to be held. With TDoV, there is more ground-level and grassroots work being done within smaller groups and organizations. We don’t have huge budgets to rent venues, get permits for parades that shut down large swathes of cities or hire performers. Would I like to see a weekend-long celebration of trans joy on the scale of the Vancouver Pride Week? Hell yeah, that’d be awesome. But trans identity (particularly that of trans women and femmes) is still quite stigmatized and maligned by huge parts of society. So we need to work on de-stigmatizing and education along with our continued fight for equality.

What are some common microaggressions or dismissive comments or actions you encounter which people may not realize they are doing or could be changed with some education?
Ha! Oh boy, where do I start. I’ll give you a little list of some nonsense I’ve had to put up with:
“Using a singular they for someone’s pronouns is grammatically incorrect and I won’t do it”. (At least 3 people have said this to me then almost immediately used it for a stranger whose gender identity they didn’t know)
“I don’t understand they/them pronouns” (It’s not that hard. You’re just lazy and probably a bigot)
“What are your preferred pronouns?” (Listen. I prefer one kind of cheese over another on pizza. I don’t have preferred pronouns, I have pronouns. Simple as that.)
“Hurrhurrr I identify as an attack helicopter” (Too bad you can’t just fly the fuck away from me with this crap).
Bathroom signs that have a traditional male/female icon but also a squid/monster/alien. (Great to know that a giant sea creature can use your bathroom – can trans folks?)
Any time people say “women and nonbinary people” with the implication that nonbinary is “woman-lite”.
Any time people say “women and nonbinary people” when they actually mean only cis women and AFAB (assigned female at birth) nonbinary people. (Newsflash: AMAB [assigned male at birth] nonbinary people exist!)
I’ve seen and heard people, even friends of mine, correct themselves when they misgender my dog but not when they do it to me. Nice to know they care more about making sure my dog is called ‘her’ than making sure they use my pronouns.

Education will help with this and so will basic respect for people. You don’t have to understand every nuance of trans identity to respect us and treat us with dignity.

If you were to suggest training to breweries, from their ownership to front and back of house staff, what would you suggest?

Pay us for our time and knowledge if you’re asking for our help. If you’re really serious about being inclusive, put the damn work in. A LOT of places I’ve talked to think that putting up a flag or a sticker shows that they’re ‘safe’. That’s literally the bare minimum of what you can do. Host queer events, hire queer folks and show us that you actually care about us and want to include us. Keep learning and educating yourself and your staff. My academic background is in gender studies and queer theory so I’m pretty well-versed in the language and terminology but I do a lot of research to keep informed on what’s changing and evolving. I read some ‘academic’ articles, thinkpieces and first-person essays to see what the rest of the community is discussing or working on or debating.

What do you recommend breweries require of event organizers, in terms of creating safe spaces, as we move into festival season.

I really like what the Brave Noise collaboration has set up. To take part, a brewery had to show that they had a house code of conduct or policy for staff. I think that’s a solid first step for festivals – have a code of conduct for the event runners/owners, but also for attendees and vendors. Violation of this code or policy results in a ban from future events. I’d go even one step further and only allow breweries with these house rules or codes of conduct to attend. Here in Vancouver, some queer parties have a ‘buddy system’ in place. This means that there are designated people at the event who can help people who are over-intoxicated, or need hydration or need help distancing themselves from aggressive or dangerous attendees. Given the nature of the festivals in this industry, a system like this can go a long way in helping people feel comfortable, feel safe and feel safe in knowing that assistance is there if or when it’s needed.

Womyn- yay or nay?
Red flag, huge nay. Womyn/womxn/wombman/wymyn/etc are largely used by trans exclusionary radical ‘feminists’ and I use the term feminist VERY loosely here. Womyn is closely associated with the Michigan Womyn’s Fest which proudly claimed it was for “women born women” (so, excluding trans folks). If you mean women, just say women.

Folkx- yay or nay?
In what context? As a greeting, it’s a yay. If you’re asking about the spelling of “folx” some people have been using recently, I personally think it’s not entirely necessary as folks is already gender-neutral. Whatever floats your goat though – I don’t use folx but I can understand why people do.

Mer-person to indicate all are welcome to use a WC- yay or nay?
NAY. I hate this with every ounce of my being. It’s not funny or cute, it’s just othering trans folks by comparing us to unreal creatures. We just want to pee in peace like everyone else and also please let us know if the facilities are accessible. Odds are you’ll have a trans or gender diverse person looking to use your washroom far sooner than a giant squid, alien or mer-person will.

Ask a persons pronouns upon first meeting them- yay or nay?
Yay. Never assume and be prepared to be asked yours in return sometimes.

Introduce oneself using pronouns – yay or nay?
Yay. I like to say “Hi I’m Bruce and you can use they/them pronouns for me. What pronouns should I use for you?”

What musicians are you listening to?
Dessa (Check out her Ides EP)
Tori Amos (my wife and I have tickets to 2 of her shows in June)
Like a Motorcycle (killer punk band from Halifax)
Angelica Garcia (Cha Cha Palace is in constant rotation on Tidal)

What podcasts are you tuning into?
Deeply Human (hosted by Dessa)
Doin’ Great! (hosted by Vicky Vox)
Skin Tings (hosted by Skin from the band Skunk Anansie)
The Homo Schedule (hosted by Liv Hewson and Jasmin Savoy Brown from the show Yellowjackets)

What novels/publications are you reading?
Kitchen Confidential by Anthony Bourdain
Care Of… by Ivan Coyote
Like a Boy But Not a Boy by Andrea Bennett
Hood Feminism: Notes from the Women That a Movement Forgot by Mikki Kendall
(I don’t read much fiction)